With Marine-Grade 316 Stainless Steel shackles and magnetic key-fobs instead of keys, these industrial general-purpose keyless padlocks are built to be water-tight; so much so, that even in the unlocked position when the receiving hole for the shackle is fully open and exposed, water still cannot reach the internals of this padlock.  Because... Read more » 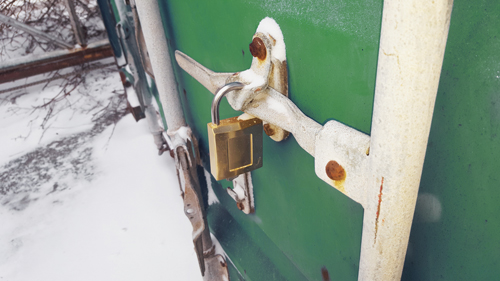 With Marine-Grade 316 Stainless Steel shackles and magnetic key-fobs instead of keys, these industrial general-purpose keyless padlocks are built to be water-tight; so much so, that even in the unlocked position when the receiving hole for the shackle is fully open and exposed, water still cannot reach the internals of this padlock.

Because of the complete lack of keyway on these padlocks, they are by their very nature completely protected against lock picking and bumping, and also removes the risk of vandals super-gluing or vandalising the keyway which can often be a recurring issue resulting in repeated inconvenience and expense - but not with these!

In fact, the only holes to be found on these padlocks (other than the ones for the shackle) are two small holes in the bottom of the padlock body which you'll see in the photos.   These are drain-holes designed to allow water to freely escape the internal mechanisms in the unlikely event that water does get in - so if dropped into water, gravity will naturally allow water to escape in due course.

Taking a look at the most unique aspect of these padlocks, this uniqueness of course lies with the key technology.   These keyfobs use a series of integral magnets which allows for over 250,000 unique magnetic keyfobs.  So, given that your magnetic fob will contain an arrangement of magnets which is just one of a possible quarter of a million combinations, you will find in the box a key-code slip which you must keep safe (you may also wish to keep a record of this digitally perhaps).   This can be used to buy more padlocks on the same magnet arrangement (just specify the correct code in the Key Ref box before adding to cart) and also allows you to buy additional keys in the future (again, using your key code in the key ref box).

This key fob also allows for single-handed unlocking of the padlock.   The manufacturer has really thought this through well, too.   The magnetic part of the body is recessed slightly, allowing the magnet to self-align for ease of operation, and it's a strong enough magnet that this is achieved effortlessly.

The fob feels appropriately sized (measuring in at 50mm x 30mm), avoiding being fiddly whilst also not being bulky or cumbersome, and in addition is supplied with a lipped cover plate which adheres to the magnetic face of the fob, effectively acting as a shield preventing the fob from sticking to your house keys etc.   Again even this plate has been well designed, and can be removed from the magnet quite simply in one-hand, using your thumb to slide the plate off the magnet.   It appears everything has been well thought out with this padlock, and we're really impressed!

The manufacturer has taken it upon themselves to do various tests on these padlocks to demonstrate their effectiveness in a wide range of fields.  This includes a 30-day salt spray test, various brute force attacks, and even ice-tests.   The padlock was able to withstand all of these tests and was still operable.   The salt spray test of course caused the brass body to oxidise as would be expected with brass, but this did not prevent the padlock from working.

Whilst these are supplied with marine-grade 316 stainless steel shackles as standard, there are optional replacement Boron Alloy shackles, which offer superior strength against cutting, but do not offer the same level of resistance against corrosion.   For higher security where corrosion resistance is less of a concern, you may wish to consider this upgrade.

Changing the shackle is incredibly simple, and takes just 5 seconds!   All you need to do is unlock your padlock (do not remove the magnet, as the internal mechanism needs to stay 'open'), push the longest end of the new shackle into the now exposed shackle-hole in the top of the padlock, and a gentle wiggle up and down on the existing shackle should see it pull free from the body.   You can then remove the new shackle from the hole you just pushed it into, and push it firmly into the now empty shackle retaining hole.

From the innovative design to the clearly well-considered execution of the build, it is clear this is a product made by Capitol.   If you don't yet know much about them and would like to understand a little more about their background and track record of success and innovation, just check out our Capitol Industries company page.

At LocksOnline we have invested in the equipment to allow us to make additional keys for you here in our workshop.   These can be ordered at the time of ordering your padlock, or equally we can create them via your key code, which is supplied on a key code label in the box with the padlock.   Please note these keys cannot be returned or altered once made so unfortunately we are unable to accept returns for these, whether ordered with a padlock or separately as an after-purchase.

Please also note that if ordering a new padlock to an existing key code, we are unable to accept these back for a return as they would be built specially for you and not be considered re-saleable.

If there's anything else you'd like to know, please get in touch!