Is there such a thing as a Skeleton Key - Locksonline Community

Is there such a thing as a Skeleton Key

An in short the answer is ‘YES’ there is such a thing but not in the same way that we now see locks and keys.

Go back a hundred years or so, most locks sat on doors and as I have mentioned before these were called rim locks, Before Jeremiah Chubb started making his detainer lock the complexity of the key was limited to wards.

The best way to describe what a ward is, is to look at an old back door lock that sits on the door and where the key would have to go through the door to fit in the lock. these locks also used to have plastic or Bakelite type round handles. The part of the key that fits into a lock is called the bit.

The top of the bit is normally a different shape that accommodates the levers in the lock, but old warded locks may have had only one, perhaps if you were lucky two levers at the most.

However, on the side of a the bit you may see indentations similar to the picture here. These are the wards, inside the lock case there would be built obstructions that these cut-outs on the key would have to pass.

Church locks normally would be large and have really detailed wards to the bit of the key. some indents may have been for decoration, but most would have been wards. There are other wards also, called bullet wards and these are to the side of the key.

Hence the expression of a ‘Skeleton Key’ 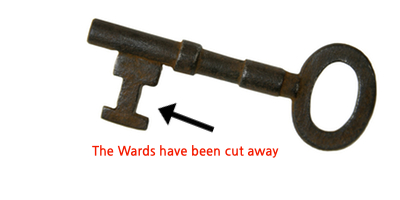 This is why these locks are now considered really poor security and should not in reality be used as a primary security solution to locking a door.

A token gesture for keeping a door secure is as much as one should expect for this type of lock.

So going back to the key, by cutting the sides out and by passing the wards, this is where the term Skeleton Key comes into play, A slimed down version of the keys that would fit most locks in the manufactures model and range of old warded locks.

Today this type of key may now also be called a master key, this is where one particular key would fit a range of locks that may also have their own keys as well.

We sometimes get folk coming into the showroom with some old locks and even new ones asking if we hold a skeleton key for these locks, sadly we have to say no and most locks these days are a lot more secure and there would never have been a skeleton key made for them. also the security is so high that you cant really make a master key that would fit a range of locks.

Techniques and designs these days necessitates that skeleton keys are really a thing of the past, however, perhaps, depending on how you look at it, Bump Keys, may be considered a Skeleton Key to a fashion.