Left Hand this, Right Hand that. Whats all this handling about? Door Handing Guide

I have been in this industry all my working life and I still get stuck on how to hand locks and doors. (Brain Fade)

When I studied in college electronic engineering we used to remember important calculations by using acronyms, or verses. One that springs to mind was what was the color coding on resistors to work out there values. barry barns rode of yonder grass bulged violently growing wild (Black, Brown, Red,Orange,Yellow, Green, Blue Violet, Grey, White). but for some unknown reason I have never been able to get my head around the left hand/right hand concept as there are so many variations to the theme, also Opposites depending if you are using the British type of handing, or perhaps the Italians version which is completely opposite to us.

So lets deal with the basic kind first and that is simple locks on doors.

Stand on the outside of a door/room, if the hinges are on your right and the lock is on your LEFT then the lock is LEFT HAND

Stand on the outside of a door/room, if the hinges are on your left and the lock is on your RIGHT then the lock is RIGHT HAND

These two rules cover nearly ALL the variations for locks on doors. However, there are then further variations to the above that may need to be considered depending on the operation of the lock.

For instance, a particular lock may have different functions for either side off the door, an example of this would be perhaps the Union Escape locks. These locks are used for rooms that need quick and precise means of escape from inside and security from outside. 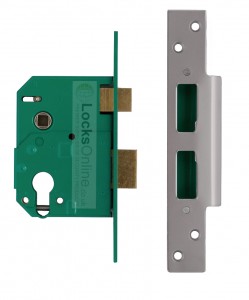 The principle would be

On the outside: The handle operates the latch and by depressing allows the door to open, like that of a simple sash lock. To lock the door insert the key and throw the bolt over.

From the inside: The handle operates the latch and by depressing allows the door to open. Insert the key or twist the turn throws the bolt into the frame.

Here is where it differs, because when your inside and the door is locked by the bolt being thrown the pressing down of the handle will automatically throw the bolt back as well as the latch. Therefore, one single operation off pressing down the handle allows the door to be opened no matter what state the lock is in prior to operating the handle.

Off course this would be crazy on the outside as it would suggest that every time you locked the door with a key, you would only need to press the handle down and the door would open.

So in this case you would need to add the operation of the door to the handing. 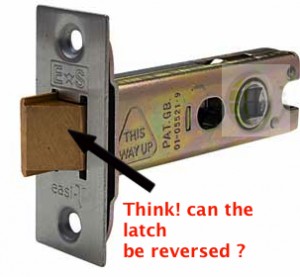 Some locks don't allow the latch to be reversed because off their construction. In other words, we may have the correct handing but the latch is the wrong way round, in which case we need to look at the operation of the door again and see if it is outward opening, if so we need to add the term Reverse Latch to the handing.

This handing covers 99% of operations, and off course if your standing on the inside then every thing then goes completely the opposite.

So REMEMBER stand on the

OUTSIDE - LOCK on the LEFT - LEFT HAND

OUTSIDE - LOCK on the RIGHT - RIGHT HAND

No matter how may times I try to remember when I am asked, I seem to get writers block, so if your on the phone to me asking some Techy Questions and handing is involved you may hear me say errrr let me think as i quickly try and find this blog or handing charts :-)

Many thanks for reading my blog