To describe any security product as unbeatable takes a lot of confidence, but door and window hardware specialist ERA believes that in its Lockguard security handle it has created a product that will never fail.
For any manufacturer in this sector, meeting current standards for building products is a primary requirement, but for ERA Group Technical Director Ben Penson, standards are a base from which to start rather than a goal to achieve.  Taking the latest Technical Specification (TS) 007 as an example he says:  'Under the new standard, the highest rating is three star, which can be achieved using a combination of handle and cylinder, depending on their individual rating, or by a cylinder alone.  If a doorset is fitted with a three-star cylinder, it meets the standard.  However, when you look at the test requirements, the cylinder has only has to prove that it can resist attack using the prescribed methods for two minutes 30 seconds.  A cylinder that fails after 2 ½ minutes and one second has still, technically, passed the test.  Thats why product development should always regard the parameters set by standards as only the baseline.'
Recent publicity has focused on the vulnerability to attack of lock cylinders – fuelled by reports that the criminal fraternity has turned to the internet to share their 'expertise' in defeating a standard Euro cylinder in a matter of seconds rather than minutes.  Ben Penson says:  'There is no argument about the vulnerability of Euro profile cylinders in themselves; we have tested cylinders widely used and there isnt one that we havent been able to defeat.  With cylinders, the problem cannot be translated into a solution.  What we have to do is look at better ways of protecting the cylinder to prevent the would-be burglar from being able to get to it in the first place and we believe that security handles provide a better route to protection.  '
It is this belief that handles are a better way of providing a secure solution that has resulted in products like Lockguard.  However, while the need to overcome the vulnerability of the cylinder was one of the prime drivers behind the development of ERAs Lockguard security handle, it was not the only one.  Ben Penson:  'We believe that much higher levels of security can be achieved with a well-designed security handle and by concentrating on the handle, we can introduce other additional features that offer considerable benefits to the householder.' 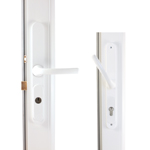 Designed specifically as a retro-fit product, Lockguard addresses one main requirement for the installer in that it is a universal product which can be used to suit any multi-point lock.  Universality is achieved with a sliding adjustable keyway.  Another security feature is the Lockguards patented lift and lock mechanism.  Simply lifting the internal handle throws the multi-locking points in a single movement.  The handle remains in the upright position, which not only prevents the external handle from moving, it also gives an instant visual confirmation that the door is locked.  For the householder, this can give considerable peace of mind, as Ben Penson explains:  'It can be easy, sometimes, for householders to forget to lock a door – or forget whether they have or not.  With Lockguard, you dont need a key to lock the door from the inside and you dont even have to to manually check whether or not the door is locked, you can see that it is at a glance.  Also for peace of mind in an emergency, the door can be unlocked from the inside without a key simply by squeezing the trigger and pulling the handle fully down.  '
Universality and, to a degree, the lift-and-lock facility could be described as matters of convenience as much as security so what gives Ben Penson the confidence to describe Lockguard as undefeatable?  Ben Pensons response is simple:  'Design, materials specification and fixings – the whole assembly has been engineered to be unbeatable.'
Going back to the primary concern of cylinder protection, Lockguard completely protects the profile cylinder from every form of physical attack using hand tools.  Cylinder snapping is prevented by an armoured steel cage with ultra-strong anti-drill door fixings.  Drilling is prevented by an anti-drill rotating hardened shield that is strongly secured in the backplate which also protects the cylinder from any pulling attack.  Being concealed within the handle, the cylinder is also visibly shielded from would-be thieves – all they can actually see is a key slot in a circle of metal.  And, an additional benefit offered by the lift-and-lock mechanism is the prevention of cylinder bumping because it locks the door completely independently of the cylinder.  Lifting the internal handle not only throws the deadbolts but also prevents the external handle from moving.
To achieve the required level of security, materials for the Lockguard have been very carefully selected for robustness and durability.  Engineering grade high-tensile steels have been specified to exacting standards for all of the components, including the fixings, and even the aesthetic design offers additional security benefits, as Ben Penson explains:  'First and foremost, security products have to be a deterrent and the Lockguard in itself offers a visual deterrent, because anyone approaching with criminal intent will see immediately that it has some meat to it whilst still being an attractive piece of hardware.'
That 'meat' has been tested far beyond the three-minutes required by the technical standards to give ERA the confidence to describe it as unbeatable.  Ben Penson concludes:  'The Lockguard has been designed to be the strongest, most secure handle on the market.  You cant budge it with a crowbar – we have tried – and nothing we have done has compromised the security of the handle or the cylinder it protects.  In fact, it is so robust that the only way we can find to defeat it is by cutting the whole door out, which goes far beyond anything that current technical standards require.  Our aim was to design the ultimate universal security handle and with Lockguard, we believe we have achieved it.'

This had been taken from Era Security Products web site, and re-posted here on LocksOnline