Locks In The 21st Century

Locks In The 21st Century

The humble door lock has gone through quite a transformation in recent years. The oldest lock known to man was found by archaeologists in Nineveh (in modern day Iraq), an ancient Assyrian city on the eastern bank of the River Tigris. Experts dated this device to be around 4,000 years old and can be considered the grandfather of the modern day pin tumbler type of lock.


This early interpretation of the tumbler worked by using a large wooden bolt to secure the door in place in much the same position that modern cylinder would. The bolt would slide through a section inside the door which would be the equivalent to a modern lock case, this would have 3 vertical holes drilled into it, corresponding to three holes in the bolt that would line up when the bolt was in the closed position. 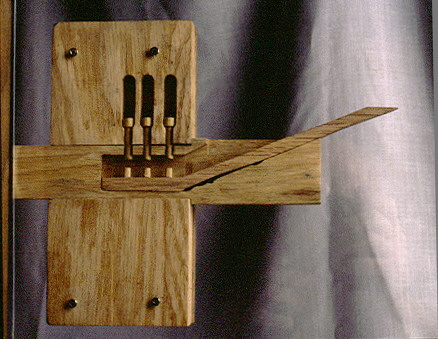 To stop the bolt from simply sliding out, and to enable the key to interact with the bolt and work as lock. There were 3 pins in the the vertical channels that would fall into the holes in the bolt, stopping it from being released in the same way as any modern cylinder lock. The 'key' for this ancient device is basically a long wooden peg that is angle upwards towards the end. On this end piece are 3 raised wooden pegs, the idea being that when it is inserted into the cutout in the outer face of the bolt, the pins on the key would line up with those in the bolt, moving the internal pins upwards, above the sheer line and allowing the bolt to be removed.

When looking at how this lock works it is clear to see how similar this system is to the function of locks in the 21st century and that aside from the materials and the tolerances improving, the basic concept is the same. Shown below is basic cross section of a modern pin tumbler style cylinder and it is plain to see the similarities. 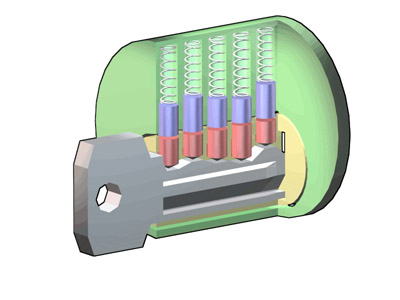 I hope this brief article has served its intended purpose and given you all a new insight into the humble lock, after all, there aren't too many things that have been around for 4,000 years and are still in use today so it goes to show how strong a principle it's design really is!