Could there be a better way to symbolise the love between two people than to scribe your name on the body of a padlock and lock it forever to one of your favourite places?

This craze is called love padlocks or love locks and it has taken the world by storm since its rise to popularity in early 2001. Lovers would write their names on the body of the padlock and then lock it around something that is special to them, whether it is a bench in a park where they met on or a bridge they first met as a symbol of their undying and unbroken love.

On Mount Huang, China, nearly every metal chain-link fence or metal pole has been adorned with padlocks. In China it is customary to lock your soul together and then throw the key from the edge of the cliff into the misty valleys below.
Its hard to say exactly where this craze began but it is assumed that it started in Asia and is the modern interpretation of an ancient custom. It has steadily increased in popularity in Europe and it is now regarded as something that happens in practically every country. In certain countries the authorities have even designated specific places where couples can go and secure a padlock without having to disturb the typical places you would normally find them, such as bridges and fencing.

This tree was installed over the Vodootvodny Canal, Moscow for couples to attach their padlocks. 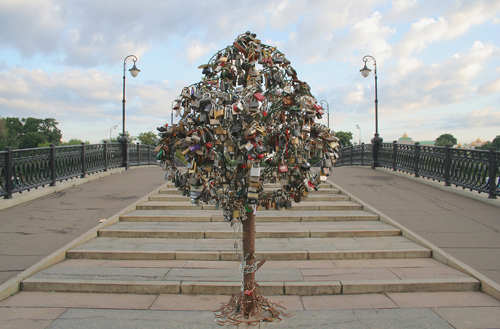 The media has picked up on this trend and love locks have even been featured on UK soap opera, Hollyoaks and hit US series, Homeland. Megastar Leonardo DiCaprio was also recently spotted paying a visit to the famous love locks at Pont des Arts, in Paris although it wasnt clear if he added one of his own to the famous collection.

If youre feeling the urge to show that special someone in your life how much they mean to you, why not pick up a few cheap padlocks, a bottle of wine and go out to find somewhere that can live on forever with a symbol of your love.