Punching the code is becoming the norm - Combination Locks

No matter where you look these days you will see no doubt a combination lock fitted to a door somewhere, perhaps if you are down your local school, council office, business premises, you will find these locks in use.

In the UK the main principle of these type of locks are for what we call in the trade as passive security. The definition of passive security putting it simple is to stop anyone who does not hold the code or does not have the right to access to be restricted. it does not mean that the physical attributes of the lock would be to the standard you would expect with  BS3621 Locks.

So it has to be clear that all these locks are doing is restricting access. 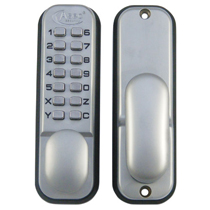 There are so many manufactures in the world of combinations locks, unfortunately there would be to many to mention and for LocksOnline to list but perhaps the main players in the UK would be Simplex Unican and Codelock, we know of more manufactures but they hold niches in the market which we will explore again in another blog.

Simplex Unican is now owned by a company called Kaba. I recall to the mid and late 80s  when I was practicing my trade Unican was probably the most well known and was used a lot in military establishments and I would suggest still is. There used to be an organization called the PSA Property Services Authority, that was if I can be as bold as to say was a government quango that looked after all the government buildings, this was bought out later by a company called WS Atkins. Anyway, digressing a little here but neither the less Unican was listed as the combination lock to be used on a government building namely the 1000 series and therefore, gathered momentum as being the most popular combination lock. Lets not forget though that the Unican locking chamber is completely unique in the way it works.

Unican, uses a sequence in punching the code in and therefore, the numbers are not really relevant. For an example if you wanted the code 1,3,4,2 then in that sequence the code has to be entered for it to work, you can also enter a code say 1 then 2 and 3 together this would also work and is unique to simplex unican combination locks. This means they are very secure in trying to circumvent the code.

Some less expensive combination locks don't have this facility, so for an example if you have the code 2341, then any permutation of this number example 3412 would open the lock, this in practice reduces the permutations and easier to circumvent. This does not

So if your locking for a quality combination lock, seriously consider Unican L1000 or other models depending on the usage of the lock. If its for an office from a public area that does not have that amount of traffic some of the simple Codelock combination locks would fit the bill very well.

If on the other hand it could be a storage room with sensitive information then consider Unican and areas where high traffic of usage is expected. There are off course some seriously cheap products on the market and they all have a place in the market depending on budget we are even selling a combination lock for less than £30.00. If you need help and advice feel free to pop a message over.

Then of course there are electronic versions of these locks coming out on the market which can quite honestly take up a complete new blog later.